Getting around in Corralejo is easy. There are bus services, taxis, and rental cars available, so you can visit and explore the whole island. Puerto del Rosario is the capital of Corralejo, and the airport is situated nearby. Fuerteventura airport is known as El Matorral, and the average flight time from London is 4 hours. There are 36 flights a week from London to Fuerteventura. Buses and taxis offer transport for arriving passengers, but there are no trains from Fuerteventura Airport, or even on the island. A number of ferry operators with regular ferry services, however, take passengers to the other nearby Canary Islands.

There are regular bus services at Fuerteventura Airport which operate directly from the airport. There are 2 bus routes available from the bus stops at the airport. One travels a shorter distance between Puerto Rosario, the airport, Caleta de Fuste, and Las Salinas, and it is known as the Route 3 bus, while the Route 10 bus travels through the same locations, but then also on to Tarajal, La Lajita, Costa Calma, and Morro Jable.

Corralejo ferry port is situated in the north of the island. There are 3 main ferry companies that service Fuerteventura – Transmediterranea, Fred Olson and Naviera Armas.

Getting to Corralejo by taxi from the airport is quite a cheap option. You will find plenty of taxis outside the airport for 35-45 euros each way.

One of the few reliable things on the island of Fuerteventura is actually the bus service. The most frequent links are from the capital Puerto del Rosario to Corralejo in the north (route number 6), and down to the airport and the resort of Caleta de Fuste /also known as El Castillo/ further south (route number 3). The bus drivers will not accept large denomination notes so make sure that you have some smaller coins. 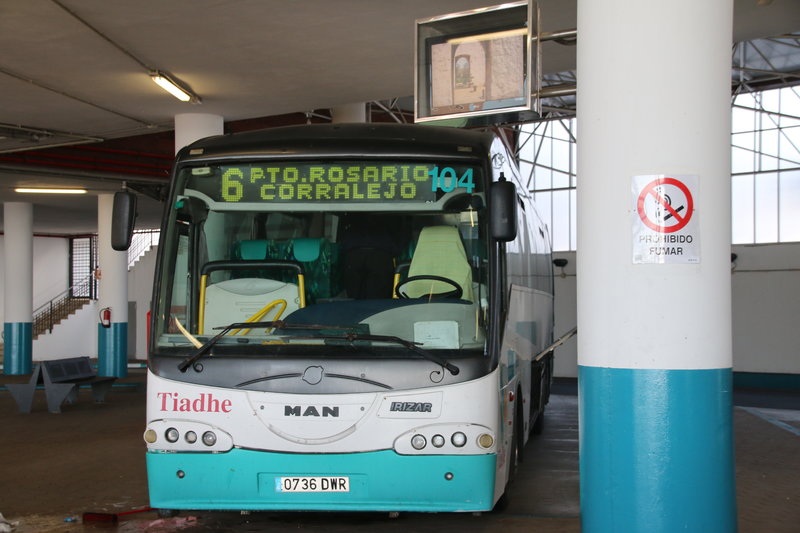 IMPORTANT – You MUST press the bell before your stop. Even if you are standing in front of the door, the driver will not stop unless he has heard the bell!